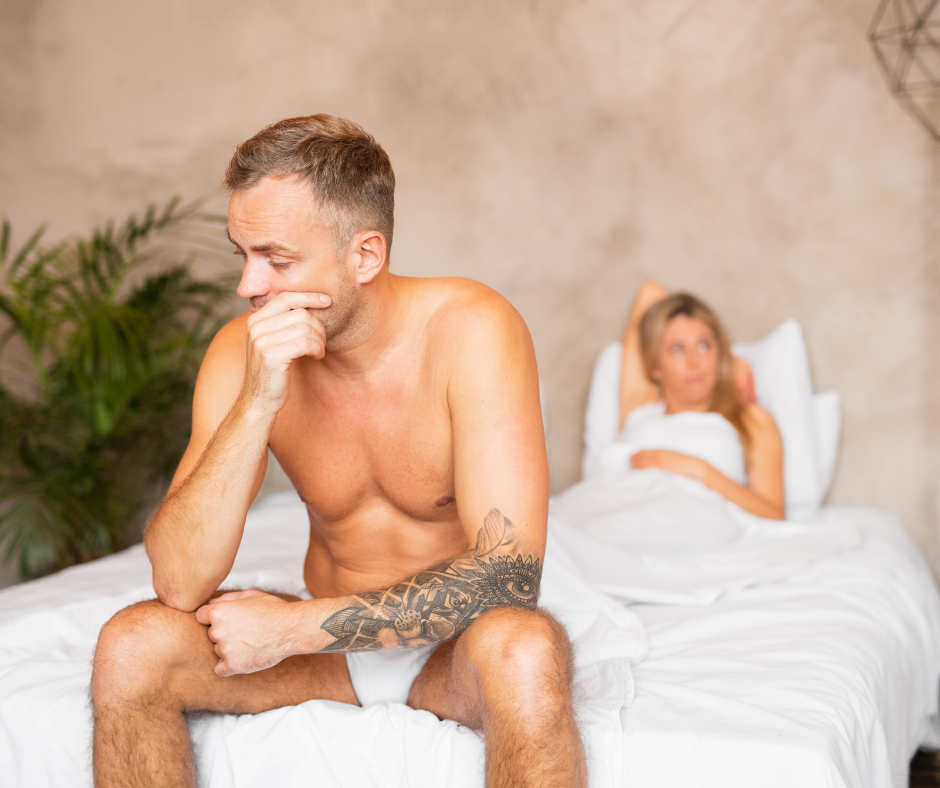 What is sexual dysfunction?
Sexual dysfunction (sexual problem) refers to a problem that occurs during any phase of the sexual response cycle.
It deprives the individual or couple of experiencing satisfaction from sexual activity.
What causes sexual dysfunction?
Sexual dysfunction can be a result of either physical or psychological problems.
• Physical causes – Many physical and/or medical conditions can cause sexual problems. These conditions include diabetes, heart, and vascular (blood vessel) disease, neurological disorders, hormonal imbalance, chronic diseases (kidney or liver failure), alcoholism, and drug abuse.
Besides, the side effects of certain medications including antidepressant drugs can affect sexual desire and function.
• Psychological causes – These include work-related stress and anxiety, concern about sexual performance, marital or relationship problems, depression, feeling of guilt, and effects of past sexual trauma.
What are the most common male sexual problems?
The most common sexual problems in men are:
• Ejaculation disorders
• Erectile dysfunction
• Low sexual desire
What are ejaculation disorders?
Ejaculation is where semen squirts out of the penis during orgasm. It is a reflex action controlled by the central nervous system.
It triggers when the sexual act reaches a critical level of excitement.
Ejaculation disorders are quite common with an estimated 20–30% of men experiencing at least one episode during their lifetime.
The disorders include delayed, painful, or too early ejaculation.
There are different types of ejaculation disorders, including:
• Premature ejaculation – This refers to ejaculation that occurs before or soon after penetration.
• Inhibited or retarded ejaculation – This occurs when there is a delay in ejaculation.
• Retrograde ejaculation – This occurs when at orgasm, the ejaculate is forced back into the bladder rather than through the urethra and out to the end of the penis.
What is erectile dysfunction?
Erectile dysfunction is the inability to attain and/or maintain an erection suitable for intercourse.
Causes of erectile dysfunction include:
• Diseases affecting blood flow, such as atherosclerosis (hardening of the arteries)
• Nerve disorders
• Psychological factors such as stress, depression, and performance anxiety (nervousness over a man's ability to perform sex)
• Injury to the penis
• Chronic illness and certain medications can also cause erectile dysfunction
What is low sexual desire?
Low sexual desire or loss of libido refers to the decrease in desire or interest in sexual activity.
Reduced libido can result from physical or psychological factors such as anxiety and depression.
It is generally associated with low levels of the hormone, testosterone. It may also be caused due to medical illnesses, such as diabetes and high blood pressure; certain medications, including some antidepressants, and problems in relationships.
How are male sexual problems diagnosed?
The doctor will begin the diagnosis after a thorough study of symptoms.
They may recommend various tests to rule out any medical problems that may be contributing to sexual dysfunction or may refer to specialists like urologists, endocrinologists, neurologists, sex therapists, venereologists, and counselors.
Can sexual problems be treated?
The success of treatment for sexual dysfunction depends on the underlying cause of the problem.
Mild sexual dysfunction that is related to stress, fear, or anxiety often can be successfully treated with counseling, education, and improved communication between partners.
How can male sexual dysfunction be treated?
Sexual dysfunction can be corrected by treating the underlying physical or psychological problems.
Treatment strategies may include the following:
• Medical treatment – This involves treatment of any disease/condition that may be contributing to men’s sexual dysfunction.
• Psychological therapy – Therapy with a trained counselor can help a person address the feelings of anxiety, fear, or guilt that may have an impact on sexual function.
• Education and communication – Education about sex and sexual behaviors and responses may help a man overcome his anxieties about sexual performance.
Good communication with the partner about the needs and concerns also helps to overcome many barriers to a healthy sexual life.
Can sexual dysfunction be prevented?
Certain instructions can be followed to maintain good sexual health and prevent sexual dysfunction:
• Follow the doctor’s treatment plan for any medical/health conditions.
• Limit alcohol intake.
• Quit smoking.
• Deal with any emotional or psychological issues such as stress, depression, and anxiety.
• Improve communication with your partner.
Dealing with the underlying causes for sexual dysfunction can help the patient understand, and cope-up with the problem better.
Various medicinal herbs like Shilajeet, Ashvagandha, Gokshura, Kapikachchu, Vatada, etc., have been used for thousands of years in the treatment of various sexual disorders.
Extensive research and testing on herbal ingredients by Himalaya have resulted in unique herbomineral preparations for treating male sexual dysfunction, which help people to cope better with sexual dysfunction.
Tweet